My First Ride Out to Offa. PART 1 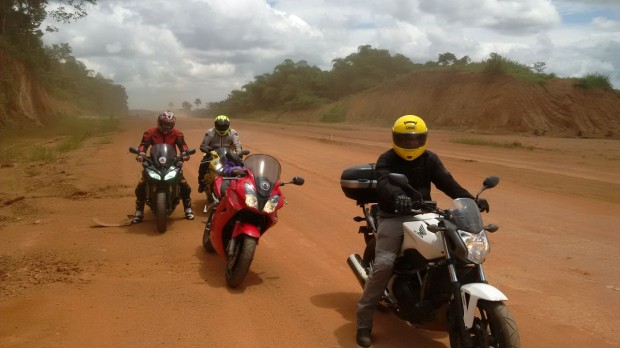 The day began with the joy of knowing that finally me sef will have taken my little tata koko and ridden on one of those journeys that the other boys had done in recent times.

Please Note: This was after some pretty hard negotiation with family members.

The take off time was supposed to be 9 am from Foto Dadi’s yard and I got there with plenty of time to spare had tyres gauged and was ready to roll, alas our RC and Maestro took there pretty time getting to the take off point and we then had to sort out RC’s bike (tyre had multiple holes and needed some extreme penetration, filing and refilling.

Take off was at about 10 am and the route was Ikeja, VI, Epe, Ijebu-Ode, Ago Iwoye, Ibadan, Ilorin Offa.

The route from Ikeja to Epe was smooth our normal traffic filled journey up to Ajah and the road opened up for our waka to Epe. From Epe we followed a completely different route to Ijebu Ode passing through some iconic villages and very interesting scenery but the sun was hot and I was cooking and already asking myself how I go survive this waka o.

We got to Ijebu Ode around 11.45 pm and had a fuel stop over where I immediately went looking for water and minerals aka soft drink. We also took time to clean our various visors ensuring sound visibility. At this point I was riding in the number 3 posiition with Dicta (RC) in 1, Kanu (SG) in 2, Maestro in 3 and Sobag (VC) in 5.

We left Ijebu Ode with our full tanks and headed for Ago Iwoye; immediately all the Bikes left my tata koko in their wake (I think all of dem were just showing me that na me dem dey pity for road o). We ride along exiting to the Ago-Iwoye road which looked fantastic brand new dual carriage way but the joy was not to last as all of a sudden shio, I was in a sea of dust no single tarmac in sight (thank God it was not raining and it didn’t rain the night before). O’boy this dust na waya o but this guy started rolling with everyone allowing each other a gap of at least 100 metres because visibility was soo bad. Suddenly out of no where two dump trucks obviously racing one another appear one heading directly for me, that’s me going straight into the side of the road and coming to a complete stop. Damn, those fuckers wana end my ride before it starts (I BIND THEM IJN) and start moving again only to see Dicta had stopped in-front to ensure everyone escaped the racing baggars.

Ago Iwoye and back to tarmacked roads. As we turned of to join the Ibadan road, Sobag misses the turn and continues to zoom towards Ijebu-Igbo. Masetro (Yamaha FZ 8) and Dicta (Honda VFR 800) take off after the Yellow Bullet (BMW S1000RR) and I hope they catch him quickly. We waited for about 10 minutes for the return (that BMW must be sweet to fire o).

Trip to Ibadan was quite quick averaging with Sobag staying behind sheparding this JJC along the way all the same I pushed the bike as hard as I could so as not to keep the long gone guys waiting for too long.

Trip through Ibadan town with Dicta in the lead and Amanor running in number 2, this our RC na the essence of biking ooooo, the bros no dey turn gently the turns are always like a dive bomber waiting to take off. Scary incident as approached Mashad Power Bus Stop (for those of you who know Ibadan lol), I was behind the RC who went right and overtook a trailer ahead of us, seeing an opening on the Left, I was in the process of opening up to pass when the trailer suddenly slammed on its brakes forcing me to squeeze a bit too hard in the emergency brake situation (thank God for ABS). Lesson don’t follow too close and always have a line of sight ahead especially behind long articulated vehicles.

Ibadan to Oyo was a breeze I had Dicta for company on this stretch of road while the others had zoomed away in hot pursuit of speed and one another. I pushed the bike as hard as I could topping 165 kph on flat grounds (180 kph on a descent).

Oyo to Ogbomosho was quite interesting took a lot of skill and patience on this stretch cos we were sharing the road with all sort of characters (trailers, okada’s, danfo’s, taxi, mini van’s etc). Kanu kept me company on this stretch going ahead at times on tight corners and giving ample notice to proceed with caution and speed. My wrist and fingers were beginning to hurt by this time and I was trying as much as possible to reduce the amount of clutching I needed to do (Lesson: I need more finger and wrist exercises bought myself one of those spring grips). At last we got to Ogbomosho and had a fuel stop and mini break. The five bikers in town became the centre of attraction with cabbies, bikes and humans stopping to have a look, take photos etc. People even had conversations on how they could drive their cars faster than any of the bikes leaving the bikes smelling dust.

Ogbomosho to Ilorin was fast everyone left me o with Kanu offering to use his leg to push me along (LOL) I politely declined and rode at my 165 kph. The bike at this point also gave me some signs that the clutch maybe slipping but I was not sure and so focused on nursing the bike as much as possible. We got to Ilorin and stopped to take pictures and stretch our legs most importantly the other guys waited for me in Ilorin.

Ilorin to Offa was single carriage and very busy so we were all bunched together on this leg of the journey. Offa seems to be a town cut off from the rest of Kwara State. All the roads in Offa are bad, deeply gutted and if it was raining will be very impassable. We touched down at Avalon hotel Offa at about 4.20 pm and after traveling the many hours, we were greeted by the gate man with please park your bikes outside. Off course these people received a lecture on the issues around customer service and the expectations that employers have in relations to their employees and service orientation. 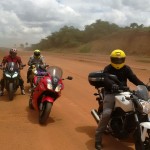 Posted On 29th October 2013 ~ 2 Comments
BACKGROUND GIST I hadn't been riding for very long and had learned, from my mechanic, all the bad habits that could potentially put me away…

Posted On 6th October 2013 ~ 0 Comments
So the day comes! Assembled at Epesok Paper mill by 7am where Sobag, FD, Amanor, Easy, Prince Adedeji, Engr Yinka, Saidu, Dayo, Tayo and I.…

From Lagos to Europe and Back.

Posted On 25th September 2013 ~ 0 Comments
So after some hitches with my phone, we finally left home around 07:30 hrs.  “We” consists of myself and my EASY RIDERS brethren, who have…