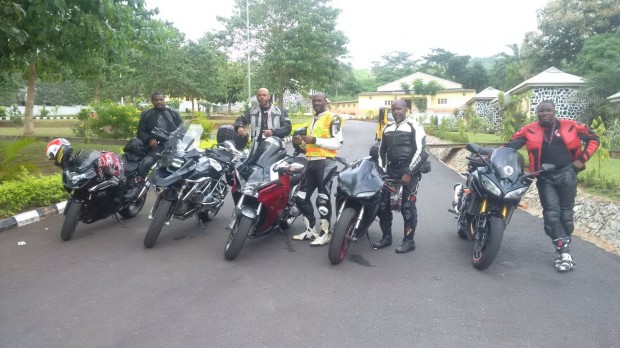 The annual ride plan had left the month of July free so when the tour bug bit and IKOGOSI came to mind, IKOGOSI it had to be!

Ikogosi, the wonder of nature, where warm water springs out from the earth and meets up with another cold spring then continuing in unison. The “GOSSY” bottled water is gotten directly from the warm springs. We also learnt that the resort had just been renovated by the Ekiti state government to world class standards. What’s not to like?

The call was sent out and responses were gotten, a day was picked JULY 4th and preps went into gear. In attendance Sheyi, Korede, Dayo, Kanu and I.

MAESTRO (FZ8) sends in a text that he’ll be 20 minutes late and instantly our VC (BMW S1000RR) proclaimed a fine – a bag of rice to be donated to charity on Sunday the 6th.

Maestro finally shows up, we complete bike checks, prayed, took our numbers and rolled out. I put DEMON, not having ridden in a while, as point so as not to put any pressure on him whilst 2DOER swept the rear.

Off we go! Sweeping through Ojota to Ketu to Mile12 to Ikorodu, the ride was smooth as construction of this stretch was in its final phase. On the outskirts of Ikorodu towards Itokin town point positions were swapped as DEMON was not too conversant with the route. Taking point, we glided through these villages to Ijebu where we got onto the Ijebu – Benin expressway. Maintaining our ride formation and cruising at touring speed of about 160kmph we glided to Ore. Just before Ore, a freshly tarred black road presented itself to us and SMOKE and I honored the invitation.  We arrived at Ore and waited for the others. When the wait was getting too long, we saddled and rode back and barely 10 km backwards, we met with the others coming. SMOKE and I turned around and headed back to Ore. All arriving at Ore we pit-stopped at a fuel station where we fueled up and topped up with bananas, groundnuts, sandwiches (packed by SMOKE’s wife), water and some Kola-nut for me.  We were also informed that Demon had a slow USaD and lost his gear lever in the process. So we got into engineering mode and Maestro the mechanic came through! Through his ingeniousness, a makeshift gear lever was patented and we rolled out again.

Heading towards Ondo, the patent failed its test and fell off there by slowing down DEMON because gear changing wasn’t easy (he had to be using the heel of his boot to change gears) this rippled on to the group and led to the pit stop at Oremeji-Sawmill along Ore-Ondo road where we took some pictures.

Taking off after DEMON and MAESTRO passed, we eased into Ondo town. Navigating the town, we continued to Akure, twist and turns not overly enjoyable because of high traffic flow. At Akure we had to reconfirm directions to Ikogosi because at this point it was becoming farther than expected. Confirmations done, we hit the Akure-Ilesha road. About 1km after the FUT Akure main gate we saw the Igbara-Oke entrance which we turned into and continued to Ikogosi. After almost 30km, we were ushered into the awesomeness of the beauty of Mother Nature. There nestled in the mountains and dense foliage of the rain forest was the Ikogosi Warm Springs resort.

We spent some time at the gate taking pictures before we rode into the resort to check into our rooms, bath and look for food! It was a tiring journey.  We had covered 350km and spent 7hours!

After settling into our rooms, we had dinner some chats and all went to hit the sack! I couldn’t sleep because the skitos in my room had hidden the duvet and sabotaged the air-conditioning so I had to get the front desk to send in the exterminators. While extermination was ongoing, I walked around the resort and was opportune to see some Ikogosi bugs in their nightly glory.

Kolanut in your system can also hinder sleep o! Dawn came and we went to see the warm spring. I must say, it is truly awesome!! We were taken round by our tour guide who also explained that the pool was supplied by the warm springs as such, the pool is eternally warm! Unfortunately we didn’t have the time to swim (there must be a return match o!)

Tour completed, Maestro the Mech in his usual resourcefulness has gotten a local to provide him with available tools with which he fabricated another patented gear lever for the Ducati and this time it passed the SON test!

We had a very OK breakfast (better than Avalon Offa)  and around 11am we said our goodbyes to the locals and rolled out.

Routing through Ilesha-Ibadan-Lagos. We had planned to stop at the Erin-Ijesha waterfalls but not know where exactly we blew past the turning and continued to Ilesha. The dual expressway availed us some stretching of legs and clearing of cobwebs from the crevices of our engines and by 12.30 noon we were on Ife-Ibadan expressway. Whilst doing some good time, along Wasimi village, I noticed that my bike was suddenly getting heavy oh s#*t!! I knew my rear was down.

Demon and Smoke who were ahead of me didn’t see me stop so they continued. I came to a stop and parked checking my rear tire to find that it was flat! Michelin Pilot Road 3 had failed.

Forgetting to have packed my repair kit, but fortunate to have stopped opposite a vulcanizer, who happened to be in Ibadan at that time…bad news! So I waited for 2Doer and Maestro. They came by, they saw, they stopped. We agreed that I should ride the bike like that to the next vulcanizer about 1km away and 2Doer left to wait ahead, he’d also sent Demon & Smoke a text on our situation to keep them posted. I tried moving but it was impossible so Maestro suggested that I pump the tire and ride to the next vulcanizer. So we pleaded with the care taker of the nearby pumping machine and pumped the tire. Whilst pumping, I heard the leak sounds and thought it could be fixed. Maestro agreed and gave me his tire repair kit and so I fixed the 1st hole, we pumped and another hole announced its presence. Fixed that one and yet another said “present boss” after fixing 4 holes and one more hole said hello we knew the tire had to come out for proper vulcanizing!

So the tire was pumped and I rode it to the next vulcaniser who thankfully was around. There the removal of the tire and patching commenced. 1hour, 5 blocked holes, tire eating eba and taking pictures later we were done and rolled out.

Ibadan came quickly and we hit the Lagos expressway. Now, I hate this portion of the road i.e Ibadan toll gate – Ogere toll gate because of the rim bending potholes and Ninja rough roads so I was taking it real easy coupled with the 5 patches in my rear tire I just couldn’t risk it. At about 5km to the middle toll gate, 2Doer & Maestro zoomed by because they needed to be in Lagos earlier and my pace wasn’t doing it. So I continued with my pace till the middle toll gate after which I picked up a bit. On getting to the Sagamu interchange, I had planned to go on the new road so prepared to get on it.

Unfortunately for me, I picked a point where the height of the edge was about 120mm my front tire went over it but the rear did not and before you could say “RC” I was on the way down. I tried using physical strength to stop the bike from going down but was too tired to muster the required amount so I gently allowed gravity win this battle. Having watched several videos about lifting heavy bikes at the Riding school, I applied the simple technique and she was back up on 2 wheels. Saddled, started and I was back on the road. Encountered an annoying “bumper to bumper” traffic from Redeem through Ofada till Mowe it took a lot of restraint and patience to keep going. Finally getting to the long bridge and I opened up like there was no tomorrow!

Got home at about 5.30pm, tired and worn out, confirmed everyone had arrived, had a bath and logged out! Total trip was about 660km, loads of experiences, lessons and pleasant fun. Would surely do Ikogosi again and soon too! 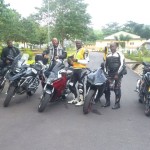 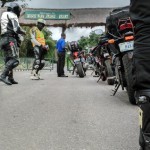 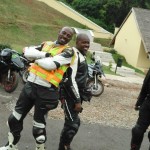 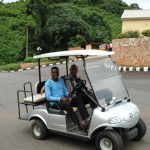 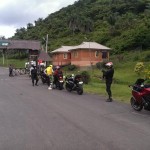 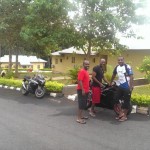 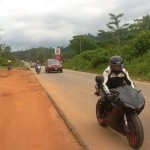 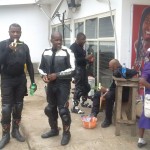 Posted On 11th September 2013 ~ 0 Comments
Day 1. Riders from Lagos, Ibadan  and PH did the ride Abuja. Stay at home Internet bikers not present at ride. Oops. Met up with…

Posted On 6th October 2013 ~ 0 Comments
So the day comes! Assembled at Epesok Paper mill by 7am where Sobag, FD, Amanor, Easy, Prince Adedeji, Engr Yinka, Saidu, Dayo, Tayo and I.…